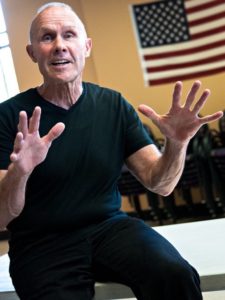 THOMAS BIRD (Writer/Performer) is a Vietnam War veteran who served with B Company, 2nd Battalion, 5th Cavalry Regime, 1st Cavalry Division in 1965-66. He was awarded the Combat Infantryman’s Badge, the Vietnamese Cross of Gallantry with palm, and all Vietnam Service Medals.

On his return to the United States Tom resumed college and his football career, but (not without considerable struggles) soon found that his post war persona responded better to the arts. He studied theatre – acting, writing and directing – and ultimately felt that his greater role in life was to give arts experience to other Vietnam Veterans.

He created VETCo, the Vietnam Veteran’s Ensemble Theatre Company, and, as the company’s Artistic Director, presented 26 plays Off and Off-off Broadway, including the highly acclaimed TRACERS at the Public Theatre, for which the company won a Drama Desk Award for “giving voice to the trauma of Vietnam.”

Tom’s life was highly influenced and he was supported by three important arts facilitators of their time – Joseph Papp, legendary creator of The Public Theatre, Lee Strasberg, revered acting teacher and co-creator of The Actors’ Studio, and Michael Fuchs, longtime Chairman of HBO. Much of Tom’s work was presented at The Public; he was taught and inspired by Lee Strasberg; and under Michael Fuchs’ tutelage Tom co-produced the Peabody, Ace, and Emmy Award winning documentary DEAR AMERICA, LETTERS HOME FROM VIETNAM. At HBO Tom developed a number of film scripts and he created further programs to give Vietnam Veteran’s a voice in society, and to help less fortunate veterans to deal with life after war.

In 1981 Tom was chosen to be one of the first four veterans to return to war torn Vietnam.
Currently, Bird is Founder and Executive Director of Walking Point Foundation (see walkingpoint.org), a non-profit, veterans service organization. WPF’s mission is to mentor all veterans from all wars – most recently from Iraq and Afghanistan, using the arts (theatre, fine art, music, comedy) as a means to get them to express themselves and facilitate their healing processes.

Tom’s newest play, an autobiographical one man show, BEARING WITNESS, will have its world premiere at the Global Peace Film Festival, in Orlando, Florida, on September 21st, 2016, the United Nations’ acclaimed “International Day of Peace.”

Samuel G. Freedman, in a preview article which appeared on Father’s Day of this year, characterizes the piece as “…a wholly unique and arresting meditation on World War II, the Vietnam War, and the Shoah, with their valor and tragedy lashed together by a father-and- son story.”

BRIAN DELATE (Director) wrote and directed the award winning indie feature SOLDIER’S HEART, and has had a diverse and rewarding career in film, theatre and TV. He has spent the last few years presenting his two-hander show MEMORIAL DAY, which was last presented at The ROAD Theatre and was developed at the Actors Studio, where Brian is a life-time member and also serves on its Board. He also presentedMEMORIAL DAY in Hanoi in front of the former enemy. On the big screen Brian has worked with such luminaries as Al Pacino, Jim Carrey, Jodie Foster, Laura Linney, Ed Harris, Tim Robbins and many others. Directors include Peter Weir, Al Pacino, Estelle Parsons, Neil Jordan, Edward Burns, Frank Darabont and Peter Hyams in such films and television shows as WILDE SALOME, NICE GUY JOHNNY, THE BRAVE ONE, THE SHAWSHANK REDEMPTION, THE TRUMAN SHOW, BUFFALO SOLDIERS, HOME BEFORE DARK, SUDDEN DEATH, SEX IN THE CITY, UNFORGETTABLE, and more. Brian was prominently featured in five episodes with Lisa Kudrow in HBO’s THE COMEBACK .  Brian has appeared on stages from Broadway to London, Greece, and Vietnam. His stage career began in NYC’s Shakespeare in the Park for the legendary Joseph Papp. Brian received critical acclaim in the original New York and London cast of the award-winning TRACERS produced by Tom Bird and Mr. Papp. He worked closely with Al Pacino in Oscar Wilde’s SALMOME on Broadway and in Los Angeles, and the documentary feature WILDE SALOME is just out along with the filming of the play — both directed by Al Pacino. Brian is a combat veteran of the Vietnam War (1969-70) where he served as a decorated non-commissioned officer.

BARBARA LIGETI (Producer) has been in show business and media all of her life.  The newest in a long line of successful and important one man shows produced by Ms. Ligeti is BEARING WITNESS, written and performed by longtime friend and colleague Thomas Bird.

Currently RIDING THE MIDNIGHT EXPRESS WITH BILLY HAYES developed by Ms. Ligeti in 2013 is touring the world and there is a television show and other iterations in development.

Other recent favored shows – TURNING PAGE in which Geraldine Page’s daughter portrays both herself and her estimable mother to celebrate this late great actress’s life and career. Also seminal post 911 work RENO, REBEL WITHOUT A PAUSE which was performed off Broadway and was made into a movie directed by Nancy Savocca. 60 MINUTES IN NEGROLAND written and performed by Pulitzer Prize winning journalist Margo Jefferson morphed into a New York Times Best Seller – Ms. Jefferson’s autobiography titled NEGROLAND, A MEMOIR.

Barbara met Pierre Cardin while in college where she was becoming a dance therapist, while also working as a performer and personal trainer. Cardin hired her to choreograph fashion shows/industrials and as a model and spokesperson to organize PR and promote his growing roster of licensees worldwide. Cardin mentored her producing career at L’Espace Pierre Cardin, his theatre in Paris, and with transfers of Pilobulos Dance Theatre and the Ondekoza Japanese Drummers to Broadway.

Ligeti was a producing board member of VETCO (the Vietnam Veteran’s Ensemble Theatre Company), founder and Artistic Director Thomas Bird. Other boards included both the New York State and City Commissions for Film, Television and Theatre, The Steppenwolf Theatre Company (where she headed up the New York Friends division), The Blank Theatre in Los Angeles (where she both produced and has an ongoing interest in the 25 year old YOUNG PLAYWRITE’S FESTIVAL). Ligeti was an originating member of The Creative Coalition – the brainchild of her dear friend c the late Ron Silver.

Barbara has had a lifetime parallel career in the wellness business. She is a master yogi and pilates teacher and studied nutrition and coaching at Columbia Teacher’s College. Her 20 year company Mindful Media produced pilates, yoga and nutrition programs for Guthy Renker and Gaiam among other distributors. She produced and directed the tv series “Better Living with Dr. Oz Garcia”.  Her film series “ROMANA ON PILATES” is a seminal source of information from Joseph Pilates himself as recorded by his muse and favorite student –and mentor of Ms Ligeti’s c the legendary Romana Kryzanowska.
Currently Ligeti, in addition to producing, coaches writers and other artists, and folks in need of a “midwife for personal growth and change”.

Ligeti is an Executive Producer at Subtractive Inc., a Santa Monica Airport based production company who create everything from commercials to music videos, documentaries and feature films. Subtractive Inc has been the official film/video company for Cochella Music Festival since its inception, also the Rock ‘n Roll Hall of Fame, and Subtractive is the media company for Elon Musk’s SPACE X. Also, Ms. Ligeti is the exercise curator for HIP SILVER – a new internet driven company providing services for future thinking people over 60.   Barbaraligeti.com

DAVID SCHWEIZER (Creative Consultant) emerged from Yale Drama School to make his New York debut at the age of twenty-four at Lincoln Center opening the brand new Mitzi Newhouse Theater with his radical version of Shakespeare’s TROILUS AND CRESSIDA for producer Joseph Papp. And, some decades later, he returned to Lincoln Center with his acclaimed staging of Richard Rodney Bennett’s opera THE MINES OF SULPHUR for the New York City Opera.

Over the years he has always directed a vastly eclectic mix of theatrically innovative work in a wide range of styles and venues. Early career highlights include world premiere productions by such playwrights as Sam Shepard, Michael Weller, Albert Innaurato, Maria Irene Fornes, Len Jenkin, Ronald Tavel, Austin Pendleton, and many others in New York City. More recent work off-Broadway/ Charles Mee’s WINTERTIME at Second Stage, William Hamilton’s WHITE CHOCOLATE at Century Playhouse, Mark Campbell’s SONGS FROM AN UNMADE BED at the New York Theater Workshop and his critically-acclaimed collaborations with composer/performer Rinde Eckert, AND GOD CREATED GREAT WHALES (OBIE Award) and HORIZON (Lucille Lortel Award). His extensive work in both new and “old” opera theater includes Benjamin Britten’s ALBERT HERRING (Gotham Opera) Stephen Hartke’s THE GREATER GOOD (Glimmerglass Festival) several notable Verdi productions- MACBETTO at Boston Lyric Opera and GIOVNNA D’ARCO at Chicago Opera Theater. His production of Victory Ullmann’s THE EMPEROR OF ATLANTIS in Boston was a ten best of the year NY Times pick. His many works for the innovative Long Beach Opera include Thomas Ades POWDER HER FACE, Michael Nymann’s THE MAN WHO MISTOOK HIS WIFE FOR A HAT, Antonio Vivaldi’s MONTEZUMA and many others.

He has directed extensively at most prominent regional and international theaters including Arena Stage, Trinity Rep, Yale Rep, The Mark Taper Forum, Geffen Playhouse, Children’s Theater Company (Minneapolis), Magic Theater, and Center Stage (Baltimore) where his new production of Tony Kushner and Jeanine Tesori’s CAROLINE OR CHANGE and Melanie Marnich’s THESE SHINING LIVES (world premiere) are notable among his many shows there, including a revival of NEXT TO NORMAL last season. Numerous international residences in Warsaw, Krakow, Lisbon, Hamburg, London (his own adaptation of PLATO’s SYMPOSIUM at the ICA) Stockholm (a tour of his collaboration with Theatre X, Foucalt’s A HISTORY OF SEXUALITY) and Toga Village, Japan. Schweizer’s work with performance and solo artists includes Ann Magnuson (YOU COULD BE HOME NOW, RAVE MOM in New York and LA) Sandra Tsing Loh (ALIENS IN AMERICA, SUGAR PLUM FAIRY LA and touring) John Fleck, Carmelita Tropicana, Mark Wolf and most recently Marga Gomez whose new play LATIN STANDARDS will be featured at New York’s Public Theater in January, and Mike Albo whose hit comedy SPERMHOOD just closed Off-Broadway.